May 1957 to May 2021
​
One of the first members of Alpha Delta Kappa in the area, Elizabeth Walters, originally was a charter member of Iota Chapter in Osawatomie, Kansas. She then transferred her membership to Theta Chapter in Kansas City, Kansas and after the chartering of Alpha Gamma transferred her membership again. Her sister, Margaret Walters, was hired in Prairie District #44 in Johnson County where Elizabeth was also teaching. After inquiring about joining Theta Chapter, Margaret was told she could not join because the chapter was already too large. So, Margaret got together a group of Prairie Elementary teachers and with the guidance of Alpha Alpha Chapter members, organized Alpha Gamma. Alpha Gamma was chartered on Saturday, May 4, 1957 at the University Women’s Club in the Sophian Plaza Hotel in Kansas City, Missouri with eighteen charter members. Sister Chapter Alpha Alpha members initiated the officers that evening. Margaret became the first president. At that time, Prairie School included 7th and 8th graders, so some of the Charter members included teachers assigned to what became Indian Hills Jr. High. Another member taught at the high school level. When joining the chapter, members were told to dress up for meetings and that there would be no smoking allowed. Members were told to keep numbers down in the chapter because they wanted to be able to meet in the member’s homes.

Members of Alpha Gamma Chapter have served faithfully on the chapter’s executive board. Throughout the years, twenty- seven members served either as an officer, committee chair, or an international convention volunteer on the District Council of Council Presidents, District 2 and 4 boards and hosted meetings, South Central Region, state and/or international levels. Two members of Alpha Gamma, Mathilda Brown and Barbara Corder, have served as Kansas Alpha Delta Kappa President.

Charter members were initiated just in time to send a delegate to join one of the 380 delegates to the 1957 National Tenth Anniversary Convention held at the Muehlbach Hotel in Kansas City, Missouri. Two years later members attended the 1961 national convention held in Miami, Florida. Kansas sisters chartered a bus and took side trips on the way. You can read the letter written by Elizabeth Walters at the end of this history to see how the trip went. In 1969, the international convention was again held in Kansas City at the Muehlbach Hotel. Many Alpha Gamma members served on committees, served as hostesses and assisted with the everyday workings of this convention. Dress was high heels, hats and gloves. In 1997, the 50th anniversary of Alpha Delta Kappa, was held in two hotels in downtown Kansas City. Again, Alpha Gamma members volunteered to help. Our chapter has been blessed to have at least one delegate attend most of the national and international conventions. Delegates have been given a monetary gift from the chapter treasury to help with expenses.

International leaders laid the cornerstone for the new International Headquarters at 1615 W 92nd Street in the fall of 1964, asked each member to donate $6.00 for the expansion, and dedicated the new building on Tuesday, July 20, 1965. Members attended both observances and also the Open House held on Sunday, October 10, 1965. Seven members of Alpha Gamma worked to make the experience more meaningful for the 400 people attending the dedication. Still more updates were needed for our international headquarters. In 1975, each chapter was assessed $8.00 per member to finance an expansion to provide for the bi-level parking lot.

In the early years, the chapter’s executive board members only served one year. In 1958, executive board members attended their first Kansas State Convention at McKinley Grade School in Iola, Kansas. Throughout the years, members have attended most of the Kansas State Conventions held throughout the state.
Alpha Gamma chapter members have always supported altruistic projects. Over the years donations were given to Ronald McDonald House, City Union Mission, and the homeless population in the Kansas City area; international projects, St. Jude, Alzheimer’s and Susan G Komen Foundation; and the Kansas Altruistic project of endowing a scholarship for senior education majors at all six Kansas state universities to mention only a few. A few years ago, the chapter began adopting first year teachers in the fall and showered them with materials and gift cards. Alpha Gamma members also contributed to the Agnes Shipman Robertson memorial fund after our founder’s passing on April 27, 1987.

Kansas Alpha Psi Chapter, chartered in 1969, disbanded in 2000. That fall, five of their members transferred into Alpha Gamma, were warmly welcomed and have become an integral part of the chapter.

On May 8, 1997 members celebrated the chapter’s 40th anniversary at 6:30 in the evening at the home of member Charis Sawyer. On May 10, 2007, members celebrated the chapter’s 50th Anniversary at 6pm at Colonial Church in Prairie Village, Kansas. We commemorated our 60th anniversary in May of 2017.
​
Many Alpha Gamma members have been honored, including Robert, husband of Barbara Hulett, who was the ADKA international president. Lyla Hoyland who received the Kansas Membership Service Award in 2007. Barbara Corder was elected the Kansas Woman of Distinction in 2008. Charis Sawyer has received the NISOD, Excellence in Education Award, from JCCC in 2009, the Master Presenter Award from NISOD (National Institute for Staff and Organizational Dev) 2009, the NICSPOD Exemplar Award (No. American Council for Staff, Program, and Organizational Development) 2010, the JCCC Distinguished Service Award (2011), the BNSF Teaching Excellence Award (2012), the BNSF Faculty Achievement Award (2013). She also received the Lucille Cornetet Professional Development Award for $1000 from Delta Kappa Gamma Educ. Foundation. Anna Dalrymple won the AK South Central Region Innovation Grant for a non-member in 2018. She joined Alpha Gamma in August 2019. Heather Sommer published her first book in February 2019. Melissia Go was the Kansas scholarship winner in 2019. Connie Weston won the AK South Central Region Distinguished Program Award for the chapter in 2018, the Kansas Membership Service Award in 2019, and the Kindest Kansas Citian Award in 2019. Tracy Smith won the AK South Central Region Classroom Grant in 2019.

Alpha Gamma currently has 26 active members and one limited member. We have three golden sisters, four sapphire sisters, six silver sisters and two violet sisters. We have had 28 members serve as president of the chapter. We have lost 22 sisters to the Omega Chapter.

Letter below from Elizabeth Walters who passed away in 1999.
​ 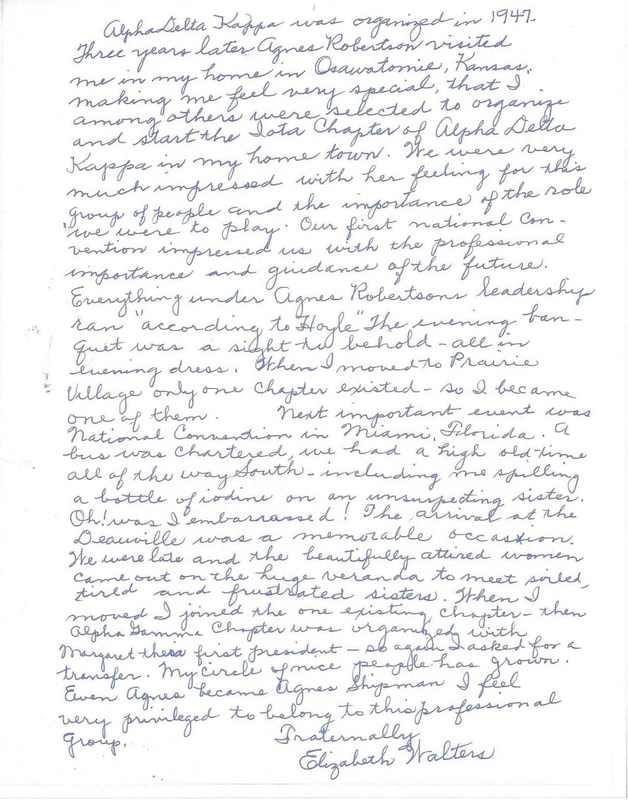